When is a Sale not a Sale?

When is a Sale Not a Sale?

Many people who are new to sales experience the frustration of thinking they have made a sale, but then, when it comes to the delivery of the product or service, confirmation in writing, or payment of a deposit, the customer does not seem to be able to finalise things and get going.

It can be difficult to work out what has happened and it can feel awkward re-approaching the customer to say the equivalent of “what is happening then?”.

Craig ran a furniture removal business in the East of England. He only had two removal vans, so frequently experienced periods when he was fully booked and also periods when both vans and his staff were quiet.

His normal terms and conditions stated that a deposit was payable, but with regular clients or people he already knew, he sometimes agreed different payment terms if they asked. This normally worked out fine, so he wasn’t unduly worried.

However, things changed entirely during a particularly busy period. A previous customer rang to make a booking for both vans. There was only one day Craig had any availability, so the customer asked to reserve that day. As he had paid with no trouble previously, Craig agreed when the customer asked to pay a minimum deposit of £100, with the balance of £5,300 to be paid on the day of the removal. He took the verbal booking as confirmation instead of asking the customer to complete a booking form.

The day before the removal was scheduled, Craig had not received any further correspondence or payment, so he tried to call the customer on the phone. There was no reply. He left messages, but no one called him back.

Craig now had a dilemma; should he have his vans and his staff on standby or not? Worse, he had turned down two other potential bookings on that day. If his customer didn’t show, then he was potentially down by over five thousand pounds.

On the morning of the removal, Craig had still not heard anything. He realised that it was very unlikely that the customer now needed him. Nevertheless, he had to pay his staff for their time. Worse, he had no alternative work to offer them.

A few weeks later, he heard that this customer’s business had gone into liquidation, owing thousands to local suppliers.

A hard lesson was learned and Craig made sure that every customer completed a booking form and paid in advance. There would no longer be any exceptions. Although there were a lot of complaints, genuine customers understood. Craig stuck to his new rules and, to his relief, never experienced this expensive situation again.

This is an excerpt from Small Business Sales Dilemmas available now on Amazon as both hard copy and Kindle.

Janet Efere is an award-winning sales trainer based in Enfield. 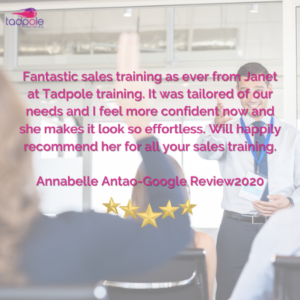